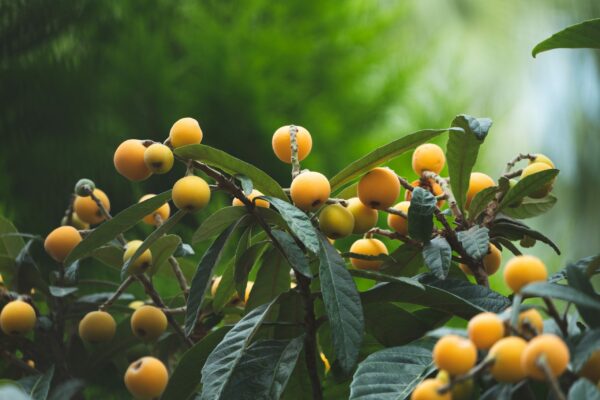 Great subtropical fruit related to apple, pear, and peach is the Loquat. While able to tolerate partial shade, this tree will do best in full sun and accommodates nicely to Florida’s higher pH soils. White fragrant flowers appear from October to February in Florida and bears clusters of small golden fruit of 1-2″ in diameter in early spring. The fruit has a large seed and has a mild, flavorful flesh. Loquat fruits are excellent eaten fresh or made into jelly, jam, preserves and pies. Fruit must be tree-ripened for the best flavor. A mature tree may bear from 35-300 pounds of fruit per tree per year. While loquats are considered somewhat short-lived trees living only 20-30 years, I would recommend them for every landscape. Loquats look tropical, are hardy and somewhat drought tolerant, and provide a tasty crop of fruit on a yearly basis. Late February and March starts the season for this fruit when few other fruits are readily available. Fruit must be tree-ripened for the best flavor usually by March.

Loquats are hardy along the coasts as far north as North Carolina, but the flowers can be damaged by frosts. Our loquats are seedlings and can take up to 6 years to bear fruit. Be careful not to over-fertilize these trees as this can make them more open to attack by fire blight, a disease of plants related to pears.

At Chestnut Hill Outdoors, we’ve been shipping mail order trees for over 30 years. We’re experts at delivering healthy trees to your doorstep. All of our trees are container grown in root-enhancing pots, ensuring healthy root systems and much better success upon planting.